My grandparents were the first people I knew to own a microwave oven. Theirs was brown*, had a tiny window that was covered with some sort of screen, making it very difficult to see what was inside. I remember watching the first time she demonstrated this miraculous machine for us, heating up my grandfather’s lunch…

…while he took a break from the store**. We stood beside her, and I think we gasped when the plate of leftovers came out steaming after just a minute or so. How far we have come – the idea of reheating something on the stove or in the oven*** seems so ridiculous now. A waste of…

…time and energy. When we got our first microwave, I know we tried to use it to make cakes and other things, but the microwave oven is not created for baking. In my humble opinion, the only things a microwave oven should be used for are 1) melting things, 2) reheating things, 3) making popcorn…,

…4) timing things that are in the oven, and 5) providing a digital clock in the kitchen.

*Were they around in the 70s? Because I feel like my Grandmother had her brown microwave in the 1970s.

**My grandparents bought a hardware store when my grandfather couldn’t stand to work the farm any longer, and built…

…an apartment above it. My grandmother made lunch, and they would take turns minding the store while the other had lunch upstairs. I would love to see that apartment once more.

***I gave my daughter a toaster/convection oven at Christmas which she tells me has rendered her microwave almost irrelevant, except for the digital clock.

Jonesing for gadgets and wanting to become a minimalist do not exactly go hand in hand. So, though I’ve managed to get rid of a lot of  assorted “things” over the past few years, I still have a drawer in my kitchen filled with things I likely never should have bought in the first place.

For example, my sous vide machine. It attaches to the side of  a large pot filled with water, keeps the water at a very specific temperature, and cooks food “low and slow”, guaranteed to turn me into a gourmet  chef over night.  I couldn’t wait for it to arrive, and have used it exactly once.

Most recently, I picked up an instant pot, and even though it is huge, even though it takes up a lot of valuable real estate in my kitchen, even though I know it is just a dolled-up pressure cooker (and I already had an old-timey one of those), I can honestly report ZERO BUYER'S REMORSE.

I use this sucker every week. Sometime I use it twice a week. Hell, I’ve been known to use it three times a week. I make big batches and store them individually in the freezer. My son, who does most of the cooking through the week, seems to love it as much as I do.

I am a little bit hooked on appliances. Not the big kind, the little kind that take up room in your cupboards and drawers. The kind you must have and then use only once or twice. It started with an immersion blender that I saw on TV. I think it was $100, and came with…

May 11, 2018
…an assortment of blades. It could turn skim milk into whipped cream, transform boiled potatoes into the creamiest of mash, and render a pig into sausage in five minutes. I had to have it but was newly married and frankly poor. So I set aside $1 per day in a jar, and 100 days later…

…sent away for my blender. That’s the extent of my memory of it. It disappeared over the intervening years. I know I used it to froth skim milk (why would anyone want skim milk whipped cream when full-fat whipped cream is a thing already?) But owning it was not as fun as anticipating owning it.

Several years ago I bought my mother a tagine. I loved the idea of it, and thought she would too. I borrowed it once to make goat (superb, if I do say so myself), but when I went to give it back, she suggested I keep it, since she didn’t think she would use it.

So now I have a tagine. I use it once or twice a year and it takes up a lot of room in my kitchen. I’ve used it to make goat again, and beef, and I intend to use it to cook venison, but my friends who hunt never seem to come home with much.

It is a beautiful thing, and I wish I could display it, but I’m not about to leave it on the stove, taking up an element for the sake of letting it be seen, so it is hidden away, taking up space, until someone brings me some venison. Or until I get some more goat.
- February 20, 2019 1 comment:

I used to love almonds, and if we are just talking about how almonds taste, then I guess I still do. After all, almonds are delicious. But for the past few years, I've no longer been able to eat them. They don't agree with me. Almonds have betrayed me. They now trigger diffuse esophageal spasms.

Other foods cause it, but almonds are the only thing I know for certain will always trigger an attack.

What the heck is that thing on my deck?

My dogs are not hunters. Once in a while, however, they manage to murder something and once they do they don't have a clue what to do with it. So they bring it to Mom. Last week, the thing they managed to murder and then gift me with was a star-nosed mole.

For the non-North Americans in the crowd, these varmints are just crazy-enough looking that you would be forgiven for thinking they must come from Australia. But they don't. 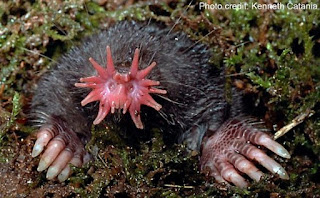 It comes as no surprise that we have moles. They work hard to dig up our lawn every year, so we've had plenty of evidence. But you don't get to see one of these bad-boys up close and personal every day, so of course I gave it a good once-over before laying it to rest.

And then, of course, I looked up a bit of information on them. Because you don't grow something like that on the end of your face for no reason. And I'd tell you all about the amazing powers of their amazing snouts, but I've run out of time.

When I left the board of directors of the theatre, I was feeling burned out and pulled in too many directions. I vowed that I would take at least a year off before doing anything else theatre-related. I realized, with great clarity, that theatre isn't my thing. It was my daughter's thing (now it isn't even her thing). So when I got the call about directing the February production of I Ought to be in Pictures, of course I said no. Absolutely not. Won't happen. Anyone but me.

The read-through is tonight. At my house. This is the LAST show I'm helping with.

I'm so over Christmas

There have been years when I fussed and worried and went into debt over gift-giving, but those days are over. Now I ask Paul what he wants (a PS4), and he asks what I want (a pair of Blundstones), and we'll likely go out and buy our own gifts and hand them over to be wrapped and then we we feel just as satisfied on Christmas morning as when we used to worry and stress over picking out just the right thing.

I tell my kids not to get me anything - and I mean it. They will, though. Neither one of them has extra cash and I would REALLY be happy as can be if we just sat around, drinking martinis and playing Jenga all day.

It's not just the gift-giving though. It's the whole WAR ON CHRISTMAS bullshit that comes out this time every year. There is no war on Christmas. No one has ever scowled at me for saying Merry Christmas. I've worked with Muslim and Jewish women and none of them have ever been offended by the greeting. It's a made-up thing by a group of people who call everyone else a snowflake, then work overtime to be offended by everything they hear.